FAIRFAX, Va. (March 16, 2021)—A minimally invasive treatment for patients whose cancer has spread to their bones provides quick and sustained pain relief and improves quality of life, according to a new study to be presented at the Society of Interventional Radiology Annual Scientific Meeting. The palliative treatment known as radiofrequency ablation (RFA) is effective in providing relief in as little as three days, and the benefits last more than 12 months—a significant improvement over radiation treatment.

“Commonly used radiation treatments can take weeks to provide pain relief,” said Jason R. Levy, MD, a vascular and interventional radiologist at Northside Hospital in Atlanta and lead researcher of the study. “A few weeks can represent a large portion of the remaining life in these patients, and RFA may be able to give them the best quality of life possible in the time they have left.”

RFA is a minimally invasive treatment that uses radiofrequency waves to create heat that kills tumor cells and destroys nerve fibers to reduce or stop transmission of pain signals to the brain. In this study, RFA was used to treat painful metastatic bone lesions and was followed up with cement injection to help stabilize the bone. The cement helped prevent fractures that are known to result following other treatments, such as radiation.

Researchers enrolled 218 cancer patients at 15 sites around the world between October 2017 and February 2020. Patients completed questionnaires to measure their quality of life and pain levels prior to the procedure, three days after and then intermittently through the one-year mark. Researchers used both the five-level EurolQol scale and the European Organization for Research and Treatment of Cancer Quality of Life (EORTC) measurement.

“What set our results apart from prior research is the sheer speed and durability of this treatment,” said Levy.  “As a result, we believe this treatment should be available to more patients with metastatic cancer earlier in their treatment path.”

The research focused on lytic bone metastases, a common type of bone tumor found in many cancer patients, making the treatment an option for a wide range of cancer patients. Predominant initial cancers in this study were breast, lung and kidney.

A limitation of the study was that many patients were lost to follow-up due to deaths related to the underlying cancer. The research was funded by Medtronic. 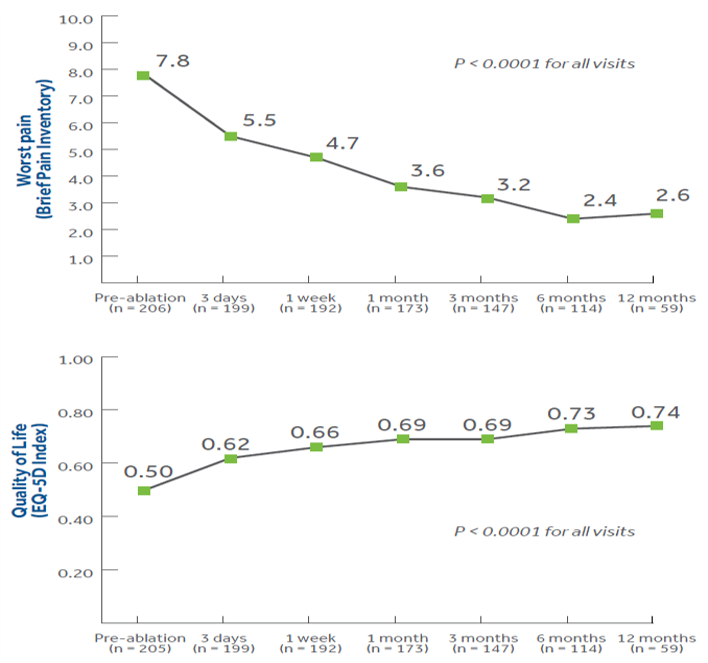 The Society of Interventional Radiology is a nonprofit, professional medical society representing more than 8,000 practicing interventional radiology physicians, trainees, students, scientists, and clinical associates, dedicated to improving patient care through the limitless potential of image-guided therapies. SIR’s members work in a variety of settings and at different professional levels—from medical students and residents to university faculty and private practice physicians.